Tiger for $500, please, Alex: An unauthorized history of golf on Jeopardy!

“The answer is,” began the mustachioed rookie host, Alex Trebek, reading the $50 clue from the Sports category, “in golf it’s two under par for a hole.”

First to the buzzer was Jack Campion, a sandy haired sales executive from Los Angeles.

And so began the long, rich history of golf-related clues — more than 800 of them in all — that would appear on 35 seasons of America’s most iconic quiz show. If that sounds like a lot of questions about pitching wedges and putting presidents and Gary Player, it is. According to a thorough-if-not-wholly-scientific analysis of every Jeopardy! clue (all 361,983 of them are cataloged on the excellent website, J! Archive), there has been, on average, one golf-related clue every eight or nine shows. 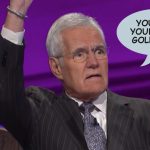 You may also like11 really hard golf questions that have appeared on Jeopardy!

“That’s a pretty high representation,” Jeopardy!‘s head writer, Billy Wisse, said in a phone interview the other day. “Probably not as a high as baseball, basketball or football, but I would guess it’s higher than pretty much any other sport.”

Wisse said golf lends itself to trivia because it is both a spectator and participant sport. “When you write clues about most other sports, you pretty much have to approach them only as a spectator,” he says. “But when you write golf, there’s two different angles: the great players and the tournaments you see on TV but also what club to use in a certain situation and that kind of thing.” As in this 2011 clue: “Sand and pitching are common varieties of these irons used to loft short shots.” (Hmm…what are wedges? Right again!)

Some golf-centric clues have been the golf equivalent of a gimme for contestants with even a baseline knowledge of the sport (“When this president played golf, he often invoked ‘Billigans’ after misplayed balls”); others have felt more like a slippery, triple-breaking 35-footer (“This chain of 748 shoe stores was named for a Scottish professional golfer” [Props if you came up with, What is Thom McAn?]. There have also been a couple of shanks, like this depressing groaner from 2017: “It’s a right-handed golfer’s shot that veers to the right, or what he might want to do to his wrists after it does.”

The Tiger Woods effect? It’s a thing on Jeopardy!, too. Woods has been the subject of a clue or the answer to a clue a whopping 84 times. His name first surfaced on the Nov. 15, 1996, episode when he was the answer to: “In 1996 this 20-year-old African-American golfer won a record third consecutive U.S. Amateur title.” Tiger’s most recent appearance came just last month when Jonathan Greenan, a human rights legal officer from Prince Edward Island, knew that “Who is Tiger Woods” was the correct answer to: “At the Buick Invitational from 2005 to 2008, many were invited but no one was beating this golfer.” (Jack Nicklaus, by the way, has been the subject of/answer to a mere 42 questions, though he does edge Woods in Final Jeopardy, 3-2.)

Whether a certain golf topic is reasonable fodder for a Jeopardy! clue is up to the discretion of the eight full-time writers, some of whom play golf, Wisse says, but none of whom could be described as avid players. (Trebek used to peg it but has been sidelined with a balky back.) “We can basically figure that a bogey and Jack Nicklaus are [fair topics] but Vijay Singh and ‘what is a drop’ might not be, but we still might try those,” Wisse says. “Sometimes we try them and they work, sometimes we try them and they don’t work.”

Case in point: this $2,000 mind-bender from 2003, delivered by guest clue-reader and seven-time PGA Tour winner Peter Jacobsen: “On this type of long putt, you don’t aim to hole out, but to leave yourself a short one.” Says Wisse, “The other clues [in that category] were much easier, so by the time we got to the fifth clue, we said, ‘What the heck, let’s see if they know what a lag putt is.’”

Alas, the contestants did not. Triple stumper!

Far less common is all three contestants stumbling over a $200 clue — the Jeopardy! equivalent of a tap-in — but that what’s happened earlier in the year after Trebek delivered this puzzler: “Golf, so relaxing… until I got 7 on a par-3, or this score.”

“What is a double-bogey?”

Up next: Adam Francois Watkins, a stay-at-home dad and lawyer from Atlanta.

“What is an albatross?”

How about you, Maureen Block, a high school English and film studies teacher from Rancho Cucamonga, Calif.?

Come on, people! What is a quadruple-bogey!

At least a handful of past Jeopardy! contestants would have devoured that clue. Among them: Armando Martinez, a greenskeeper from Santa Monica, Calif., who appeared in Season 17 (in 2001); John Chapman, a golf-course manager from Columbia, Mo., who played in Season 14; and Yancy Naughton, a golf-magazine publisher from Point Pleasant, Pa., who was a Jeopardy!champion in Season 16. Ryan Ballengee wasn’t in the golf business when as a high school senior from Pasadena, Md., he earned semifinalist honors at the 2001 Teen Tournament. But he is today, as the proud owner and operator of Golf News Net.

Mark Dawson, a business manager from Chamblee, Ga., who banked nearly $350,000 over five Jeopardy!appearances, didn’t earn a living in golf but he did love the game. After spending some of his haul on a two-month trip around Europe, he came home and splurged “on big breakfasts, golf and subscriptions to the New York Times.” Mike Thayer, who as an undergrad at Rutgers was the Jeopardy! College Champion in 1999, became a bit of a celeb at his local course. On one occasion he was spotted by a foursome of strangers who serenaded him with the Jeopardy! theme song.

Robin Cheney, a middle school teacher from Rancho Santa Margarita, Calif., was decidedly not a golfer. When asked in advance of her 2012 appearance about her dream categories, she said, “As long as we stay away from college sports and golf, I think I’ll acquit myself pretty well.” (Robin got her wish.)

Repeat clues on Jeopardy! are about as rare as an albatross but they do happen, especially in a niche category like golf. Bob Hope’s affinity for the game is a well-tread topic (it has come up at least 11 times), as is astronaut Alan Shepard’s lunar shot (at least five times). Even easy-peasy golf questions have made return appearances, including this $800 clue from a show last March:

Right, you’re on a roll!