The Secret History of Tiger Woods

Ten years ago, Tiger Woods sat in his boyhood home across from his father's body, waiting on the men from the funeral home to arrive and carry Earl away. It was around 3 in the morning. Outside this bedroom in Cypress, California, the mechanism of burial and goodbye sputtered into action, while inside, Tiger and his half sister, Royce, floated in those gauzy first hours after a death, when a loved one isn't there but doesn't quite seem gone either. About an hour earlier, Earl had taken two or three final breaths that sounded different from the ones that came before. Tiger got the call and came straight to Cypress, passing the Navy golf course where he learned to play, turning finally onto Teakwood Street. His dad never sold the house because he liked the easily accessible nostalgia. If Earl wanted, he could go see the Obi-Wan Kenobi poster still hanging on Tiger's closet door, or find an old Nintendo or Lego Star Destroyer. Earl died three steps from his son's old room.

Royce says she sat with her father on the bed, rubbing his back, like she'd done the last few hours as he faded.

"You're waiting for him to wake up?" Tiger asked.

Three days later, on May 6, 2006, the family gathered at a private air terminal in Anaheim to take Earl's remains back to Manhattan, Kansas, where he grew up. Tiger's mom, Tida, and his wife, Elin, sat together in the Gulfstream IV, facing each other, according to Royce. Elin did college homework, which she often did during any free moment, in airplanes or even on fishing trips, working toward her degree in psychology. Tiger's half siblings came along; Royce and Earl Jr. sat at a table, and Kevin sat across from them on a couch. There were six passengers total, and Tiger plopped down in his usual seat, in the front left of the plane. He put the urn holding his father's remains directly across from him -- Royce made a joke about "strapping Dad in" -- and when the pilot pushed the throttles forward to lift off, Royce said, Tiger stretched out his legs to hold the urn in place with his feet.

The flight took 2 hours and 20 minutes. His siblings tried to talk about the old days. Kevin retold a favorite about a camping trip with a 10- or 11-year-old Tiger, in a forest of tall trees: While walking to use the bathroom, Tiger had stopped and peered high into the branches.

"What are you looking at?" Kevin had asked him.

Sitting in the plane, Tiger didn't say much. He and his siblings landed and drove to the Sunset Cemetery, a mile southwest of K-State's campus, past the zoo and a high school and a cannon dedicated to the memory of dead Union soldiers. Earl, a former Green Beret and Vietnam combat veteran, would have liked that. The graveyard was cool in the shade, the hills rolling from the street toward a gully. Woodpeckers hammered away in the trees. The family gathered around a hole in the ground, between Earl's parents, Miles and Maude Woods. Two cedars and five pines rose into the air. Tiger stayed strong, comforting his mother, and Earl Jr. watched him, impressed. They buried the ashes and left.

After a brief stop at the house where Earl grew up -- strangers owned it, so the Woods family stood in the front yard and told a few stories, and this being rural Kansas, the neighbors didn't interrupt or ask for autographs -- everyone headed back to the airport. Seventy-seven minutes after touching down in Kansas, Tiger took off again for Orange County.

Consider him in that moment, 30 years old, the greatest golfer in the world, winner of 10 major championships and counting, confident that the dreams he and his father conceived on Teakwood Street would eventually all come true. His pilot climbed above the clouds. The return trip took 40 minutes longer, exactly 3 hours, and nobody said much, feeling heavy, processing the idea that they'd left Earl behind in the Kansas dirt. Tiger Woods sat in his usual place, facing forward, the seat across from him empty now.

ALMOST 10 YEARS later, on the far western end of an island in the Bahamas, Tiger Woods is where he feels most comfortable: hidden behind multiple layers of security and exclusivity, standing with two or three friends in the dark of a marina. It's early December, 28 days before his 40th birthday. His annual tournament begins at a nearby course soon. Both his boats float a few dozen yards away, in two of the first three slips: the 155-foot yacht named Privacy, alongside the smaller, sleeker diving boat he named Solitude. On the main deck of the big boat, there's a basket of sunscreen, a pile of rolled towels and a white orchid. The marina around them couldn't be more private, without a coffee shop or store, not even showing up on the navigational charts in some maritime GPS systems. (Woods' camp declined to comment for this story.)

Docking in a luxury marina is about the only place to catch a random glimpse of Tiger, who moves through the world in a cocoon of his own creation. When he bought his plane, he blocked the tail number from tracking websites: It ends in QS, the standard code for NetJets. Many athletes, by contrast, have some sort of vanity registration, and some even have custom paint jobs; Michael Jordan's plane is detailed in North Carolina blue, and his tail number is N236MJ -- the "6" is for his titles. Jack Nicklaus flies around in N1JN nicknamed Air Bear. Sitting on a tarmac, Tiger's plane looks like it belongs to an anonymous business traveler, nothing giving away its famous owner. He comes and goes quietly.

Tonight the running lights glowing just offshore belong to Steven Spielberg's The Seven Seas. Marina staff members come across a lot of celebrities, and when they gather away from work, they tell stories, about how Johnny Depp is down-to-earth or how Tiger isn't a diva but is just, well, he's just really weird. Once, when his dog left a tennis ball in the harbormaster's office, Tiger called down and asked someone to "secure" the ball until a crew member could retrieve it, and the staff still laugh and roll their eyes about it. They don't know that he often uses military lingo, a small window into how deep he's gotten into that world, words like "secure" and "downrange" and, even in text messages to his friend Michael Jordan, "roger that."

Standing at the southwest corner of the marina, Tiger and his group make plans for later, and then he walks off down the road. There's no entourage or Team Tiger, no agent or handlers or managers, just a middle-aged man alone, coming to terms with himself and his future, which will hold far more quiet marinas in the years ahead than packed fairways. Not long ago, he asked Jordan a simple yet heavy question: How did you know when it was time to walk away?

Tiger hasn't hit a golf ball in about two months. He can't really run; not long ago, he told Time magazine, he fell down in his backyard without a cellphone and had to just lie there until his daughter happened to find him. Tiger sent her to get help. He's had two back operations in the past three months. Yesterday at a news conference, he said for the first time in public that his golf career might be over.

A reporter asked what he did for exercise. 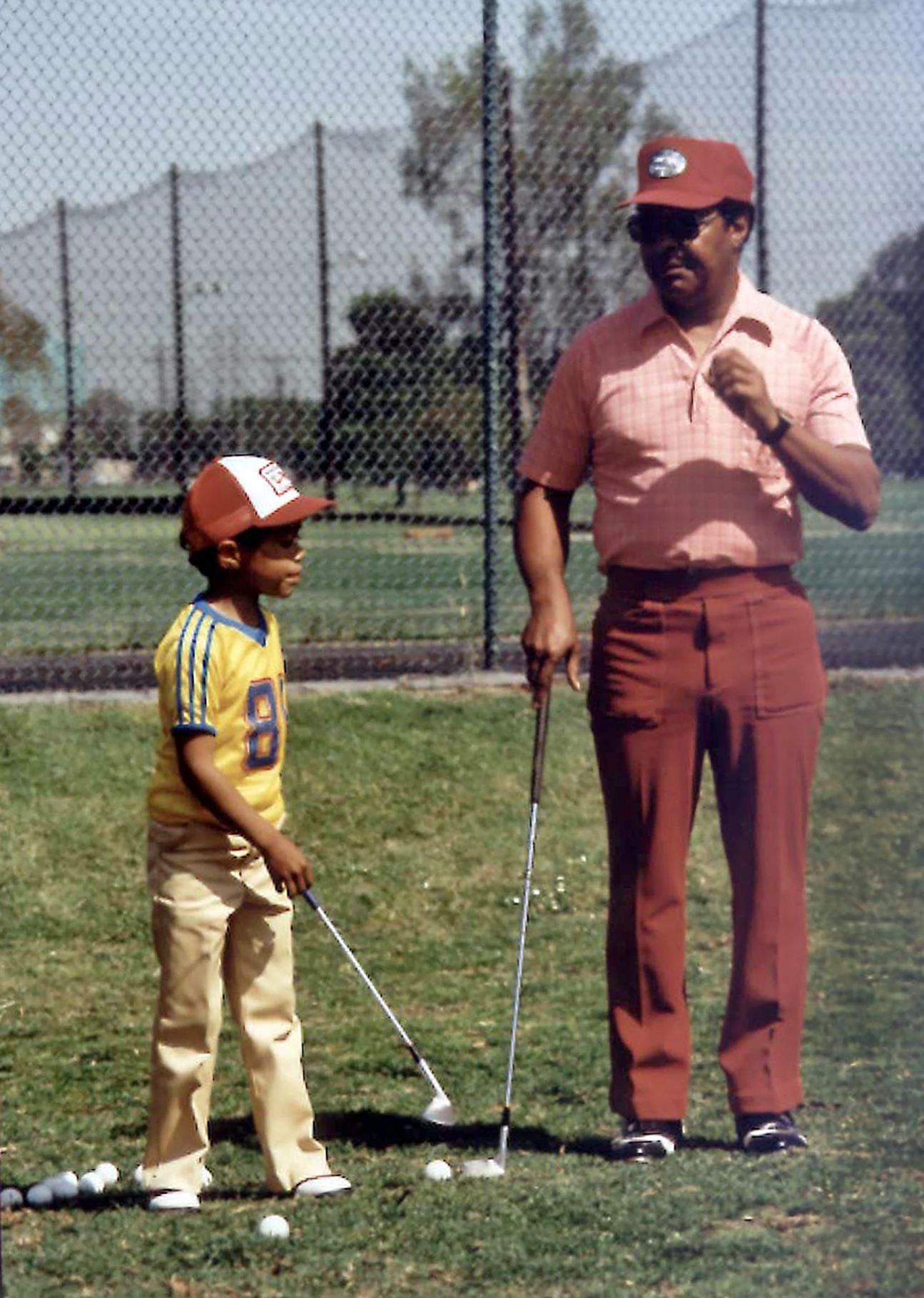 Tiger grew up without any siblings or many friends and spent his childhood with Earl, either on the golf course or hitting balls into a net in the garage. Splash News

"I walk and I walk some more."

He paused, and asked himself a question. "Where is the light at the end of the tunnel?"

"I don't know. I think pretty much everything beyond this will be gravy."

His friends started hearing these admissions about a month ago. His college roommate Notah Begay texted him around Halloween. Tiger loves Halloween. He's a big kid in many ways. When he lived in Orlando, a former neighbor said, he liked to ride on a skateboard behind a golf cart in the gated country club he called home. He loves the Transformers and comic-book heroes; in the past, he's checked into hotels under the name Logan Howlett, which is Wolverine's human name in X-Men. When he booked his free-diving lessons in Grand Cayman, instructor Kirk Krack recalled, he reserved his spot under the name Eric Cartman. So of course he loves Halloween, and when Notah asked about his costume, Tiger wrote back.

"I'm going as a golfer known as Tiger Woods."

Sitting at a steakhouse in the Bahamas one night, Begay is quiet for a moment. He's here for the Golf Channel, forced years ago by his own bad back to make the same admissions that Tiger is making now: The dreams he dreamed as a boy are ending. They met as children -- Tiger was 9 and Notah was 12 -- playing youth golf in California. They saw each other, perhaps the only nonwhite, nonwealthy people around, and Notah walked up to Tiger and told him, "You'll never be alone again." They've been friends ever since, passing together through each stage of life. A few weeks ago, he and Tiger were hanging out at the house in Jupiter when Woods realized they needed to make a carpool run and get his kids at school. They drove over and parked in line with the other parents, about 30 minutes early, and to kill the time, they laughed and talked about Stanford. "Tiger and I do a lot of looking back," Begay says. "He loves to talk about college."

Tiger told stories about how his daughter likes soccer and is already a prankster, and Begay said how his girl loves gymnastics and drawing, and then they both looked at each other and just started laughing: Can you believe we are sitting in a carpool line? Tiger is facing the reckoning that all young and powerful men face, the end of that youth and power, and a future spent figuring out how those things might be mourned and possibly replaced. This final comeback, if he ever gets healthy, will be his last.